As a class project, a student wanted to calculate the velocity of a 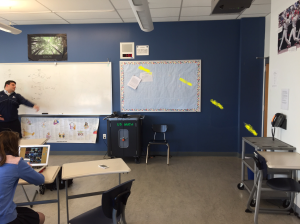 marker being thrown into the trash.  He calculated the time it took the marker to hit the trash after he released the marker and the distance to the trash.  This is the horizontal average velocity, so I asked him to go further.  The image below is a projectile motion still and a quick desmos graph of a parabola of best fit.  Now he has an equation for height… his task is to determine the vertical velocity.

Below is a link to a video of how I created this image.